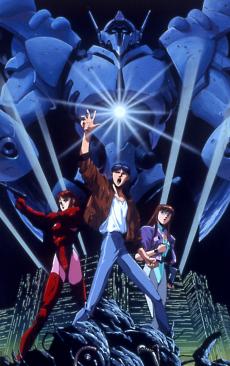 Tomoru Shindo is an ordinary college student who is having some troubles: he doesn't really know what he wants to do with his life, outside of maybe joining the Earth Defense Force. Lately, he's been having odd dreams about protecting a woman from some giant monsters; also, he has dreams about some mecha named Orgun running from some other mechas, which get destroyed by Orgun for their effort.

It's more than a dream: a race of metallic warriors called the Evoluder (no, not that Evoluder) have been traveling through the galaxy annihilating all civilizations in their path, and Earth is next. But Orgun, one of the higher-ranking Evoluders, has gone rogue and is determined to make it to Earth first, even if it costs him his life.

Meanwhile, a woman named Dr. Michi Kanzaki had received signals from the moon thanks to the supercomputer I-Zack causing her to build her own mecha. When the Evoluder attack and the EDF's weapons are unable to do anything to it, Dr. Kanzaki's mecha wakes up and breaks out. Dr. Kanzaki goes after it in an attempt to retreive it; at the same time, Tomoru tries to find the place where the aliens have been attacking. In the process, they are both attacked and trapped by the aliens only to be saved by the Doctor's robot. Tomoru and the robot, which turns out to be Orgun fused together, go to fight the aliens.

This is a three episode OVA from 1991. It was directed by Masami Obari and distributed by AIC and Artmic (which notably featured many of the staff from Bubblegum Crisis, including Obari himselfnote he directed and provided Key Animation to episodes 5, 6 and 8).