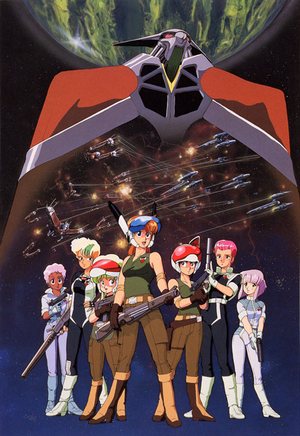 Gall Force is a group of science fiction anime OAV series made starting in 1986 by the studio Artmic, with production by Youmex and AIC.

The original series concerns a Hopeless War between the One-Gender Race of Solnoids (humanoid females) and the Paranoids, who are an amorphous race that usually inhabits powered armor suits. The remaining crew of the Solnoid cruiser Star Leaf barely escape the destruction of their fleet in yet another hopeless battle, only to get caught up in a conspiracy that will have far reaching consequences for all concerned.

The original story has two direct sequels, in which Lufy is rescued ten years after being stranded in space during the original. She joins up with another replica of Catty and her team, first to prevent the ongoing war from claiming Earth and the Star Leaf's legacy, and later in a last desperate attempt to bring everything to an end other than the mutual annihilation both sides seem to be seeking.

Later, Rhea Gall Force and its sequels, the Earth Chapter revisit the story on a post-apocalyptic Earth, thousands of years after the original series. The Lost Technology of the Solnoids and Paranoids have given birth to the "NME", techno-organic weapons trying to Kill All Humans, and the Identical Spiritual Descendants of the original cast find themselves fighting for survival.

The more obscure final entry in the original continuity is New Era, which has humanity rebuild from the ashes of the Earth Chapter, only to fall into conflict with a race of Artificial Humans they created. But the legacy of the "NME" is still plotting to destroy everything, and the only hope of preserving any of humanity lies with Catty's newest incarnation.

The series saw a revival in 1996 with Gall Force:The Revolution — an attempted Continuity Reboot of the franchise that replaced the Paranoids with a perpetual civil war between factions of Solnoids, and a group of rebels trying to bring that war to an end. Despite an all-star cast of voice actresses, the series was quickly forgotten, and is the only part of the franchise not released in English.