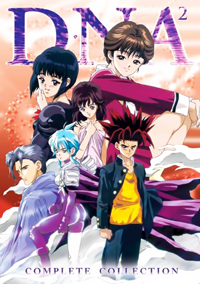 In the future, the world's overpopulation problem is traced back to Junta Momonari and his supernatural ability to seduce women, which gains him the title of "Mega Playboy". Though you'd never know it, since currently Junta's powers have not woken up, and he's just your typical Unlucky Everydude with a literal allergy to women... that causes him to throw up whenever he sees a naked girl that isn't his mother. Which happens in front of Tomoko Saeki, the most beautiful girl at his school.

Right after this hilariously horrible incident, an Action Girl named Karin Aoi travels back in time to "assassinate" his ability by shooting him (non-lethally) with a special bullet that alters his DNA before his powers as Mega Playboy come to the surface... Unfortunately, she accidentally used a bullet she personally customized to create a "perfect husband" — causing Junta's powers to not only awaken, but be exponentially stronger.

Now Karin has to find herself another way to control Junta's powers, or face the death penalty. While waiting for new orders from her superiors, she stays at Junta's home to keep a watch on him and learn about his environment (and the girls who could be affected, like Tomoko), and then she meets Ami Kurimoto, Junta's Unlucky Childhood Friend who is the only girl who is immune to the Mega Playboy's charm. Now she has to see what to do before Junta wreaks havoc among the female populace!

Originally a short-lived manga by Masakazu Katsura (who also created Video Girl Ai) which was serialized in Weekly Shonen Jump from 1993 to 1994, later adapted into a 12-Episode Anime in 1994. Its plot and characters also formed the basis of a famous Newgrounds Dating Sim called SimGirls.