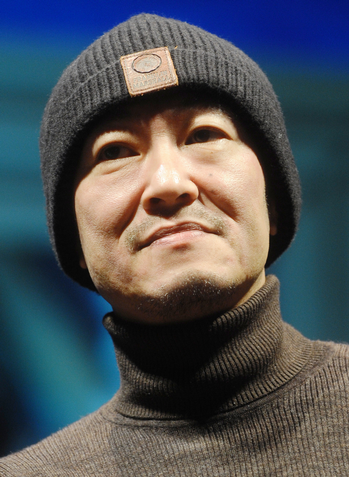 Born in Fukui, he had always liked to draw, but spending some months recovering from illness is what got him into drawing seriously. Few later he began his career as a mangaka, kickstarted by Wingman and then reassured by Video Girl Ai, which is the series that made him famous.

He has also worked on the character designs for IRIA: Zeiram the Animation (which was based on the movie Zeiram), Tiger & Bunny, GARO: Crimson Moon and Double Decker. Love & Destroy marks his character design debut in video games and Astral Chain his second foray after 10 years.

Katsura's style is very easy to recognize, both in terms of design and then of storytelling. Katsura's stories tend to be not just fanservicy, but very emotion-driven. More than one of his mangas are huge on the "growing up and going into adulthood" aspect, with the charas going through lots of emotional turmoil. i.e.: in Video Girl Ai, the Robot Girl Ai develops feelings for a guy she was just supposed to help, which threatens her own existence; said guy loves her but isn't necessarily in love with her, but then his feelings change and waver. In DNA² we have Junta's Pornomancer powers being jumpstarted all of a sudden and influencing all the girls around him whether for good or not. In I"s, the I Trio (Iori, Ichitaka and Itsuki) have to deal with their own matters as well as their relationships, and it goes on and on.

Katsura has been Vitriolic Best Buds with Akira Toriyama for a long time, too. A Running Gag in his mangas is the presence of this background character "Mr. Mayarito", whose name is an anagram of Toriyama's surname.

Oh, and he also likes Batman. A LOT.