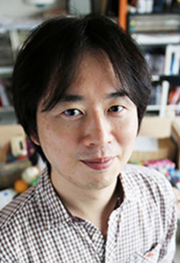 You've gotta give the guy credits for sheer stubbornness.
Advertisement:

Masashi Kishimoto (岸本 斉史, Kishimoto Masashi, born November 8, 1974) is a Japanese manga artist, well known for creating the manga series Naruto which was in serialisation from 1999 to 2014. He has a twin younger brother, Seishi, who also is a manga artist.

He's mostly know to be the Mangaka creator of Naruto. But he wrote some others manga before writing Naruto, such as Karakuri, Michikusa (a slice-of-life manga), and an action manga named Asian Punk. He then wrote the pilot version of Naruto, under the guidance of Kosuke Yahagi, his first editor, which was well received. He then received an offer for the serialisation of his manga Karakuri, but was cancelled immediately due to poor reception. He then went on writing Seinen Manga with Yakyuou and Mario (a Seinen mafia manga, he'll write later a complete one shot manga on this.) hoping to having better luck on Seinen magazines. Yahagi eventually persuades him to stay on Shounen, and he wrote Magic Mushroom, but is stopped by Yahagi when both of them agree to submit a reworked version of Naruto for serialization, and the rest is history.

On November 10th 2014, Kishimoto ended the 15-year run of Naruto. By the end of the publication, Naruto had spanned 72 volumes and (as of September 2014) generated global sales of more than 200 million copies. Masashi Kishimoto then took the time to take his wife on honeymoon, which he never had the time to do during Naruto's serialization.

Shonen Jump began publishing his new manga Samurai 8: The Tale of Hachimaru, (which he's been working on since 2016) on May 2019, where he worked as the writer of the manga while being illustrated by Akira Okubo. It ended in March 2020.

Works associated with him:

Masashi Kishimoto and his works provide examples of: