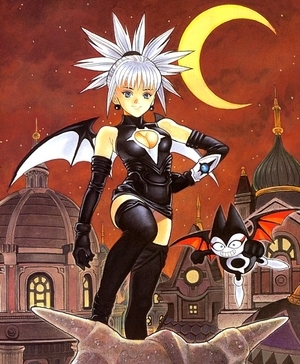 Shy waitress Aimi Komori crosses paths with De-Mo, a resident of the Demon World who forcefully introduces her to the magic eye shadow that transforms her into Shadow Lady. Shadow Lady takes Gray City by storm as a Classy Cat-Burglar and becomes the focus of a police task force led by Bright Honda. Shadow Lady makes fools of the police, earns a mysterious rival, and finds a friend in Lime Hosokawa. She discovers that there's more to De-Mo than first appeared when the Demon Police Trio coerce Shadow Lady into recovering stolen demon world artifacts on the threat of killing her and De-Mo.

Unfortunately, Shueisha canceled the series shortly after the Demon Stone arc began, so it was severely truncated to fit into the remaining schedule.