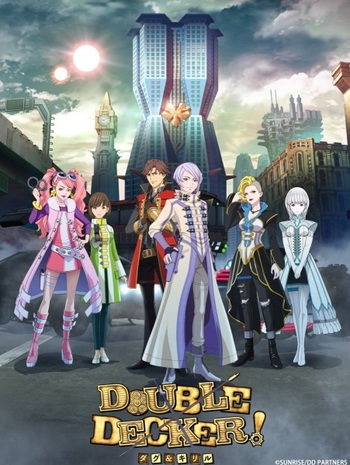 The city state of Lisvalletta. Two suns rise above this city, and the people here live peaceful lives, but in the shadows crime and illegal drugs run rampant. Among them is the dangerous, highly lethal drug "Anthem" which casts a dark shadow over the city. The SEVEN-O Special Crime Investigation Unit specializes in cracking down on Anthem. This unit operates in two man "buddy" teams in what's called the "Double Decker System" to tackle the problem. Doug Billingham is a seasoned investigator, and joining him is Kirill Vrubel, a wannabe hero and rookie cop whose abilities are mysterious and unknown.

An anime original from studio Sunrise with the creators of Tiger & Bunny, including character designs by Masakazu Katsura. It is one part of the new Tiger & Bunny sequel project

, though whether it takes place in the same universe or not is not known yet.

The anime began airing on September 30, 2018 and is available to stream on Crunchyroll with a simuldub from Funimation.