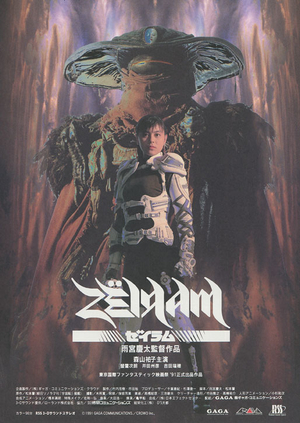 A 1991 Japanese SF/action film, directed by Keita Amemiya, in which a nigh-unkillable alien creature (Zeiram) arrives in on Earth (landing in Japan, naturally). It is followed by Iria, a female bounty hunter from another planet who has been pursuing Zeiram. Upon arriving, Iria, Zeiram, and two electrical workers are drawn into an alternate dimension where they only have a certain amount of time to kill Zeiram.

Zeiram was followed by a sequel, Zeiram II, as well as an anime OAV prequel, IRIA: Zeiram the Animation, which depicts Iria's first encounter with Zeiram. There were also two video games developed by Banpresto — Hyper Iria for the Super Famicom and Zeiram Zone for the PlayStation.

This film and its followups contain examples of: