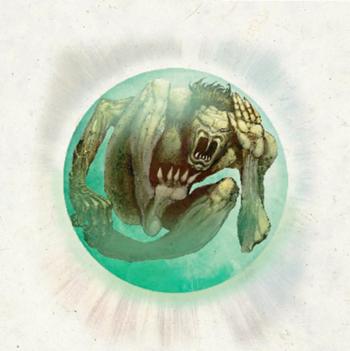 One of many exciting ways to misuse force fields for fun and profit.
"Did you know I can create a force field inside someone's body and expand it until they explode?"
— Susan Storm, Fantastic Four: Rise of the Silver Surfer
Advertisement:

Deflector Shields are usually a defensive measure, protecting a person, object, installation, or ship from harm. But sometimes, force fields can be dangerous, either intrinsically or through using them in creative ways. Force fields opening and closing may cut objects or beings into pieces, or a Containment Field may shrink around an object, crushing it into oblivion. If the capability exists to create force fields within another object (like a person), those fields may interrupt vital connections (such as blocking a human's carotid artery, starving the brain of oxygenated blood) or be expanded to tear the unfortunate subject apart. If the force field in question is strong enough, hitting it may be like hitting an indestructible barrier, smashing the crashing object into bits.

When a Barrier Warrior decides to get dangerous, chances are good they will invoke this trope. Technical Pacifist versions can non-lethally disable their enemies with such attacks, while less scrupulous ones may end up invoking the Chunky Salsa Rule.

Related to Portal Cut, when dismemberment happens as a result of a teleport portal. Subtrope of Lethal Harmless Powers. Related to Absurd Cutting Power. Compare Orbiting Particle Shield. If the force field is used as a melee weapon, it's a kind of Shield Bash.