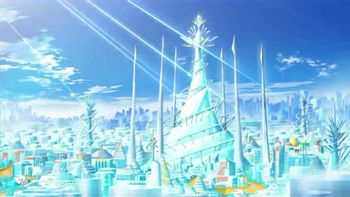 Johnny groped through the pristine folds of his toga, wondering how Mankind could touch the stars yet fashion-wise be stuck in the days of Imperial Rome.
— Plan 7 of 9 from Outer Space
Advertisement:

After passing the "big, shiny and sciencey!" period, a highly developed civilization can enter a stage where technology continues to advance, but becomes a lot sleeker and subtler. At the same time, society gets epic. Jumpsuits will start being replaced by togas, robes and such garments, bustling mega-cities by brilliant arcologies. There will be crystals. Lots and lots of crystals. This world of tomorrow may end up looking much like Ancient Greece or Rome (the theme-park Cecil B. de Mille version at least) while still enjoying ultratech comforts.

It's kinda like the civilization-scale equivalent of crossing the Bishōnen Line.

Any society with Crystal Spires and Togas holds a high chance of being ruled by Philosopher Kings, and populated with Perfect Pacifist People (or aliens, as the case may be) and requires others (namely The Hero and his squad) to take up arms for them. Occasionally they occur in the past, A Long Time Ago, in a Galaxy Far, Far Away..., since decimated by some catastrophe with perhaps a single surviving Advanced Ancient Acropolis. Sufficiently Advanced Aliens are not the same thing, but as beings who can do anything with no apparent devices, they could be a logical outcome. Thematically it may play opposite number to a society in Medieval Stasis. A common subversion has this kind of atmosphere only for the rich and powerful, while everyone else lives in a Used Future.

The rare cases where a future society is genuinely not a Bad Future might look like this, but even some Bad Futures still do.

The same sense of style permeates other facets of society, not just clothing and architecture. Instead of a president or an assembly, the Minbari are ruled by the Grey Council, the Nibblonians from the Hall of Forever (which also hosts the Feast of a Thousand Hams), and the Eldar by the Farseers.

While there's a definite trend towards giant and architecturally impressive glass towers in the modern era, the trope hasn't quite made it to the status of Truth in Television yet — aside from a conspicuous lack of togas, robes, or unisuits, these shiny new buildings aren't part of the sort of sweeping social movement this Trope describes but individual corporations jockeying to display their wealth.note Of course, this trope would apply if all the individual corporations and members of the population were sufficiently wealthy to live in a Crystal Spires and Togas world; for example in a post-scarcity civilization. Utopian cities they are not; very real slums crowd their feet.

As TIME magazine put it, this is nearly the opposite of Steampunk, as Steampunk seeks to make technology more visible, easier to connect with than the sleek shiny technology of this era. Another opposite would be The Apunkalypse, where the future belongs to violent, shabby-looking vandals. Compare with Defector from Decadence, Space Elves, City of Gold and Space Brasília. See also Power Crystal and Data Crystal, for the Plot Device version. Cyberpunk was created as a reaction against this particular Science Fiction trope.