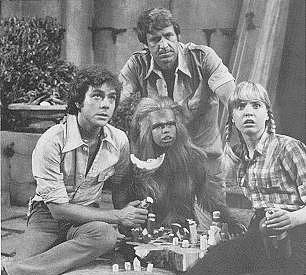 Land of the Lost is a 1974-1977 NBC Saturday morning Science Fiction kids' program created by Sid and Marty Krofft, Allan Foshko and an uncredited David Gerrold, and produced by Sid and Marty Krofft Productions. A small family of outdoorsy tastes are thrust into a Lost World that initially appears to be some kind of "Hollow Earth" scenario, but later turns out to be a pocket universe. The Land of the Lost is a tropical jungle home to a wide variety of creatures long extinct on Earth including an amusing family of hominids and several large and threatening dinosaurs. And in an ancient ruined city, they find a race of aggressive but light-sensitive insect-lizard people called "Sleestaks" by a mysterious message written in English on a wall near its entrance.

The Marshall family must make their home amidst this alien terrain and defend themselves from its dangers. They find surprising allies — the previously-mentioned family of hominids, a time-lost scholar from the distant past of the Land, and the occasional visitor like themselves — and slowly learn a few of the secrets of the builders of the Land, but never do find their way home. (One episode, however, states outright that at least Holly will escape by her twenties with some mastery of the ancient technology; another shows the family leaving but, in a strange time loop, entering the Land at the same time.)

Although the show is probably best remembered for the bizarre mix of decent stop-motion and positively awful puppetry used to portray the various dinosaurs, it is more notable for the general high quality of its scripts, which were frequently written by "name" Science Fiction authors. Any given week might showcase a story written by Gerrold (the show's story editor in season one), Ben Bova, Theodore Sturgeon, Larry Niven, Norman Spinrad, Samuel Peeples or D.C. Fontana, all of whom contributed to the increasingly complex and intriguing mythology of the series.

However, none of them contributed to the controversial third and final season, which many fans consider the series's Shark Jumping point for losing Rick Marshall and for abandoning much of the internal logic of the series mythology. Even as early as the mid-80's, network reruns of the show were omitting the third season, as did Syfy and Chiller in their marathons many years later. For several years, MeTV reran the show in its entirety (on Saturday mornings, appropriately). Some fans do appreciate at least certain elements of the third season, such as Uncle Jack's personality or the mysterious "repairman" entity, Blandings.