Film / Land of the Lost 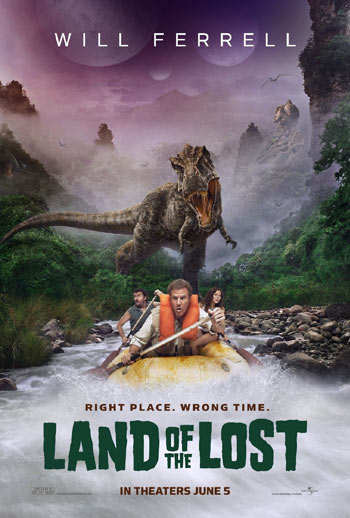 Land of the Lost is the 2009 Science Fiction Adventure Comedy based on the 1974 series of the same name, directed by Brad Siberling and starring Will Ferrell, Anna Friel and Danny McBride.

The story focuses on Rick Marshall (Ferrell), a somewhat pompous paleontologist whose career was waylaid after a disastrous TV interview where his theories of time warps were ridiculed, thus he now works as a lowly job at a Tar Pit tourist attraction. However, he's approached by a college student, Holly Cantrell (Friel), who believes his theories could be right after showing him proof via a fossil of a cigarette lighter, and a crystal that gives off tachyon energy. After building an amplifier for it, they head for a cave that gives off the same energy. Joined by Will Stanton (McBride), the gift shop owner where the cave is located, the three venture in and discover a time warp which they fall into. Winding up in the alternate world where objects of various cultures and periods litter the land and populated by primate-like beings (such as their friend, Cha-ka), dinosaurs and lizard people. It's the find of a century! But can the group survive the world's dangers and more importantly, find a way back to their world.

The film is more comedic and slapsticky than the series, but also includes drug-use sequences and plenty of sexual humor, making the marketing campaign's partial targeting of children highly confusing. It's more a parody (described as such by Ferrell himself) than actually bearing any relation to the series.