Film / Land of the Blind 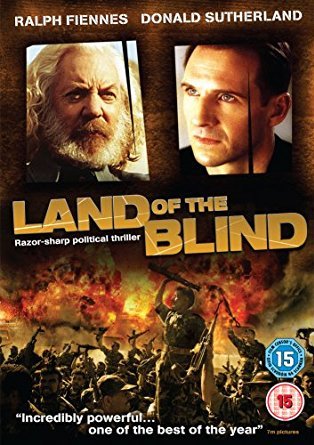 A 2006 film with dark political satire by Robert Howard, starring Donald Sutherland and Ralph Fiennes. It explores themes of revolution, terrorism, freedom and memory, playing on many real historical examples.

Opening in a land aptly named Everycountry ruled by Maximilian II ("Baby Max") (Tom Hollander), son of a Mussolini-like dictator, it revolves around Joe, a prison guard (Ralph Fiennes) and imprisoned dissident writer Thorne (Donald Sutherland). Thorne speaks with Joe, impressing him by his idealistic convictions, protesting his treatment by refusing to wear a prison uniform and using his own feces to write on the walls. Maximilian II, or Junior, is shown to be dangerously unstable, running the country's film industry and churning out cheap action movies. This may be a reference to Kim Jong-Il, son of the late North Korean dictator Kim Il Sung who had done the same.

Publicity of Thorne's protest raises opposition, and Baby Max orders him tortured into a false confession on live TV. It backfires when Thorne blinks Morse code to say it's been forced. In the end, he is released and made a member of Parliament, on the lines of Nelson Mandela.

Thorne bears a certain resemblance to Karl Marx in his appearance, with disturbing indications of his authoritarian bent that are proven sadly correct. Joe, being made a palace guard, sees Junior's depravity up close and personal, causing him to join Thorne for real. The rebels break in to kill him and the First Lady after a Kangaroo Court show trial of maybe ten minutes. Joe becomes the hero of the revolution, and Thorne is now leader.

The rot sets in quickly, however. Women are made to wear Muslim-style coverings, vegetarianism becomes mandatory, intellectuals or educated people are sent to reeducation camps, and the references pile up quickly to Iran, Cambodia, Russia, China, etc. Joe realizes the new regime is equally bad or worse than before, refusing to swear loyalty to it. He is placed in a reeducation camp, where inmates are indoctrinated to be happy with the bare minimum and love the leader. Thorne visits it and doesn't recognize him.

At last Joe appears to submit, but outside people are revolting anew. Thorne is killed by his wife in the bath, a la Marat, and the boy nephew of Junior is put in power. Joe, however, being part of the revolution, is not released when the nephew of Baby Max is made the new leader. It becomes unclear what is real or not as he writes of his experiences, apparently hallucinating visits by his family. A reference by Thorne earlier to Rudolf Hess being left alone in jail, with it torn down after he died because the memory of him had been too much, gets born out with Joe. He knows too much and will not side with any oppressor.