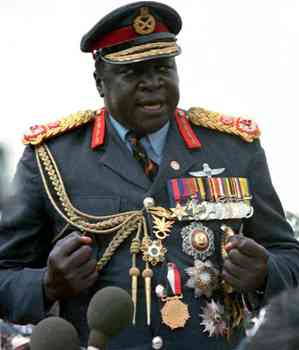 Idi Amin Dada (circa 1925 - August 16, 2003) was President of Uganda from 1971 to 1979. He was originally a former boxer in the army who rose to the rank of Colonel. In 1971 he launched a coup that ousted president Milton Obote from power. The British were glad to get rid of Obote, a socialist who was not aligned with their own political and economic interests. Support for the coup was also widespread among Ugandans, since Obote's governance was increasingly brutal and authoritarian. Amin, however, would turn out to be far worse. The dictator became notorious in the international press for saying incredibly stupid and silly things on camera, almost appearing as a child in an adult body. For instance, in regard to the Watergate affair, he personally sent Richard Nixon a letter wishing him a speedy recovery and advising him to imprison the leaders of the opposition when his nation's stability was in danger. He was fond of watching children's cartoons, nicknamed himself the last king of Scotland among other grandiose titles (see also that Bling of War in his picture) and once arrived in the UK for an official state visit, only informing the Royal Palace of his arrival when the plane had just landed on the London airport. And when Britain was facing an economic crisis, he mockingly started a charity called "Save the British Fund" to humiliate them. Many foreign media depicted him as a harmless clown and countless cartoons, parodies and comic strips only added to this image.

Behind the scenes however, Amin's regime was characterized by gross human rights abuse, political repression, ethnic persecution, extrajudicial killings, nepotism, corruption, and gross economic mismanagement. In 1972, Amin plunged his East African nation into economic chaos by expelling tens of thousands of Asians who had controlled the country's economy. The number of people killed as a result of his regime is estimated by international observers and human rights groups to range from 100,000 to 500,000. He was said to be a cannibal, which remains unproven, but heads of his victims were found inside his fridge. He also ordered many people to be executed by being fed to crocodiles.

All these reports turned Amin into one of the most colorful and frequently mocked politicians of The '70s. As the decade went on, he was subject of many sensationalized Exploitation Film documentaries and biopics that focused on his gruesome deeds, such as General Idi Amin Dada: A Self Portrait (1974), Raid On Entebbe (1977), "Victory at Entebbe" (1976), "Operation Thunderbolt" (1977), and the Rise and Fall of Idi Amin (1981).

On 30th October, 1978, Idi Amin sent troops to invade the Kagera region of Uganda's neighbor Tanzania, starting the Uganda-Tanzania War. Unfortunately for Amin, however, Uganda's military was mostly trained to execute its own civilians and thus ill-prepared to actually fight a war against another country. As a result, Tanzania defeated Uganda's invasion with embarrassing ease, and, in turn, they invaded Uganda. Though he received military support from Muammar Gaddafi and the Palestine Liberation Organization, the Tanzanians toppled Idi Amin's regime and he fled to Libya and then to Saudi Arabia (after getting caught by Gaddafi plotting to overthrow him), where he lived in comfortable exile until his death on August 16, 2003.