Film / The Lair of the White Worm 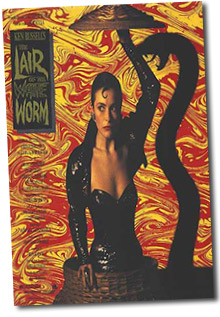 Lair of the White Worm is a 1988 horror movie directed by Ken Russell; starring Amanda Donohoe and a young Hugh Grant, loosely based on a novel by Bram Stoker.

The film begins with Angus Flint (Peter Capaldi), a Scottish archaeologist, discovering a large reptilian skull in the backyard of English sisters, Mary and Eve Trent. The Trent sisters share with him that their father disappeared in a local legendary cave while on expedition and believe the skull might be connected somehow. This cave was on the property of the D'Ampton family, nobles in the area and the subject of a local legend. Centuries ago, a D'Ampton fought a giant snake in the same cave and killed it by cutting it in half with a sword. This giant snake is referred to in legend (and a rock'n folk song) as the D'Ampton Worm. They soon meet James D'Ampton (Grant), the current heir to the property, and attempt to unravel the mystery.

Meanwhile, returning from a vacation, Lady Sylvia Marsh (Donohoe) returns to her mansion next to the D'Ampton home. Lady Marsh is a well respected member of the area and, of course, happens to be a vampire. It also just so happens that she worships the D'Ampton Worm and is keen on its return. She has her eyes set on James D'Ampton and the sisters, particularly Eve. As it turns out, Lady Marsh needs the blood of a virgin to release the D'Ampton Worm and Eve fits the bill. What follows is a surreal, tongue-in-cheek horror movie filled with the occult, blood sucking, a giant snake, and Amanda Donohoe with a strap-on.

''And when at night it crawled about a-lookin' for some booze,
It it fell dry upon the road, it milked a dozen cows.''
— The Ear Worm song... ear worm, get it?

Alternative Title(s): The Lair Of The White Worm