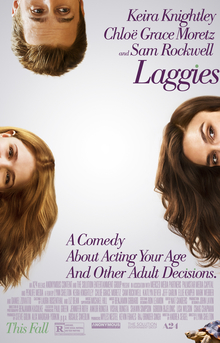 "Hey, did ya hear the one about the grown woman who started hanging out with a bunch of pubescent kids?"
"You can't keep putting aside what you want for some imaginary future. You've gotta suck it up and go with your gut."
Advertisement:

The film follows 28-year old Megan (Knightley), who has vague aspirations and a masters degree to become a family counselor, but no real ambition. Her boyfriend and parents urge her to attend career seminars or counseling, and after an unexpected marriage proposal at her high school friend's (Ellie Kemper) wedding, she runs off to a liquor store, where she meets high schooler Annika (Moretz). Their unlikely friendship fuels her decision to tell her boyfriend she will be attending the seminar, while she actually spends time with Annika and her father Craig (Rockwell).