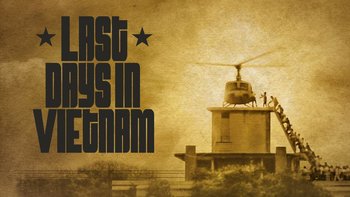 Last Days in Vietnam is a 2014 documentary film written and directed by Rory Kennedy (daughter of Robert F. Kennedy).

It is an accounting of the end of The Vietnam War, specifically the frantic American evacuation in April 1975 as South Vietnam collapses and the North Vietnamese armies converge in triumph on Saigon. The speed of the disaster catches everyone by surprise. The American authorities in South Vietnam, led by Ambassador Graham Martin, refuse to accept the plain evidence of an unfolding distaster, and thus delay evacuation until the last moment, with terrible consequences. As the communists close in on the capital, the Americans are forced to resort to a desperate evacuation by helicopter airlift over barely 24 hours. As soldiers, sailors, pilots and State Department civilians scramble to get out, they are faced with a terrible problem: the untold thousands of South Vietnamese civilans associated with the American presence, who are desperate to escape before the vengeful North Vietnamese arrive.

One of the main talking heads is Frank Snepp, then a CIA analyst at the Saigon embassy, who later wrote the definitive book about the fall of Saigon, Decent Interval. Other interviewees include a U.S. Army intelligence officer, the Marine guards who manned the perimeter at the American embassy, a Marine helicopter pilot who flew in and out of Saigon evacuating Vietnamese civilians, an Vietnamese student who tried to make it out through the embassy, and a South Vietnamese naval officer charged with keeping South Vietnam's navy ships out of the hands of the communists.