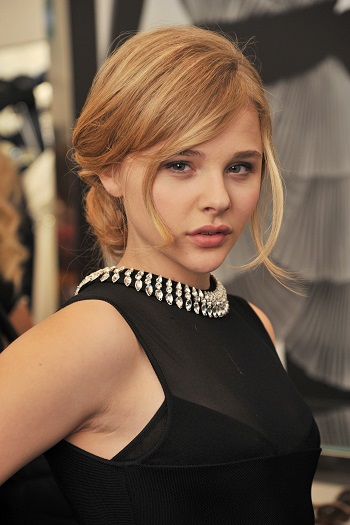 "I hope to make acting my career for the rest of my life, if I can. If acting doesn't work out, I'd love to produce, direct or write. I just want to stay in this business. That would be my number one thing. I always want to be an actress."
Advertisement:

Chloë moved from Atlanta to New York in 2001 with her mother Terri and her older brother Trevor because he was accepted into a professional performing arts school; this initially got her interested in acting. Her Hollywood career began when she and the rest of her family moved to Los Angeles in 2003. Her first role in Hollywood was as Violet in two episodes of the series The Guardian, and her first film role was as Molly in Heart of the Beholder.

It was not until her second big-screen acting role in the remake of The Amityville Horror (2005) that she earned greater recognition in the form of a Young Artist Award nomination. After Amityville, Chloë's acting career progressed further when she received several guest-starring roles on TV, as well as a role as one of the family children in Big Momma's House 2. Among the most notable of her TV roles are Candy Stoker in an episode of My Name Is Earl and Sherri Maltby in Desperate Housewives. She also voiced the U.S. version of Darby in My Friends Tigger & Pooh.

In 2010, Chloë appeared as Hit-Girl in director Matthew Vaughn's superhero film Kick-Ass, based on the graphic novel of the same name by Mark Millar and John Romita, Jr., for which she has received widespread critical acclaim. She trained with Jackie Chan and his stunt crew for three months prior to filming Kick-Ass and did most of her own stunts while filming on location. Also that year, she played Abby, a 12-year-old vampire, in Let Me In, the American Remake of the Swedish film Let the Right One In, which was released in 2010. On that same year, Chloë was cast as Little Anne Sliger in the psychological thriller Texas Killing Fields.

Chloë's projects for 2011 included Hugo and Hick. She also portrayed Carolyn Stoddard in Tim Burton's film adaptation of 1960s Gothic soap opera Dark Shadows, released in 2012. In 2013, she reprised her Star-Making Role as Hit-Girl in Kick-Ass 2 and starred in the re-adaptation of Stephen King's classic Carrie. In 2014, her films included The Equalizer, the reboot of the cult TV series, and the film adaptation of If I Stay.

Chloë was in an on and off again relationship with Brooklyn Beckham (son of Victoria Beckham) from 2014 to 2021. She's also mentioned being queer, while having kissed Kate Harrison publicly, but hasn't further commented on her sexuality (in the past she said people shouldn't have to come out). However, she's been vocal in support of LGBT+ rights (two of her brothers are openly gay).

In mid-2016, Chloë announced she would be taking a hiatus from acting

, and would be dropping out of all her current projects — including the live-action remake of The Little Mermaid. She explained it as "It's not particularly time off, I'm just becoming more picky and particular about what roles I'm choosing. I think as an actor you have a huge opportunity to find yourself through the roles that you choose. I think it's my time, right now in my life, to figure out who I am and what I am and what I want and what this industry means. Why not sit back, slow down, realize I'm 19 and go, 'Hey, let's make stuff that really, really hits hard with who I am and helps me figure out what it means to be a 19-year-old actor who is just doing her thing.' I pulled the plug on all my movies because I want to reassess who I am and find myself within my roles again. I’m realizing that I can slow down."

In 2016, Chloë signed a partnership with Alienware to promote the role of women and girls in video gaming. She has played video games since she was very young and excels in it.

Since then, she has returned to acting full-time and has starred in The Miseducation of Cameron Post, Greta, and Shadow in the Cloud.

Chloë Moretz and her works provide examples of: