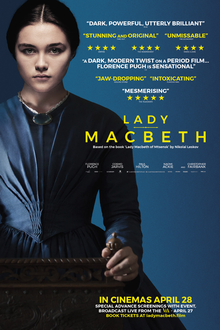 "To the cross, to the prison, to the grave, to the sky."
— Katherine
Advertisement:

Lady Macbeth (2017) is a British drama film directed by William Oldroyd and written by Alice Birch, based on the novella Lady Macbeth of the Mtsensk District by Nikolai Leskov.

1865, rural England. The young and beautiful Katherine is married off to the much older and bitter Alexander Lester, at the behest of his brutal and domineering father. From the very beginning, her marriage is loveless and devoid of any physical intimacy, as her new husband seems to dislike her just as much as she dislikes him. She feels bored and caged in the drafty Lester manor, especially as she is forbidden from indulging in her favorite pastime, the outdoors. But once her husband and father-in-law go away on business, leaving her on her own for an extended period of time, she begins to explore the surrounding countryside and gradually begins to take other liberties as well...