Film / The Last of Mrs. Cheney 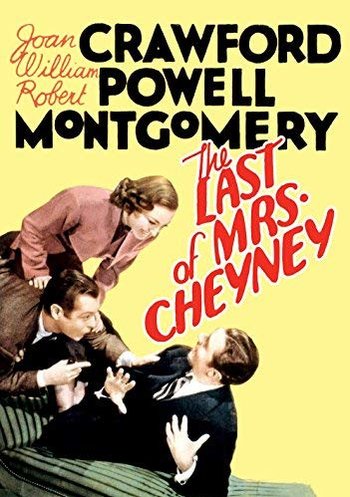 The Last of Mrs. Cheyney is a 1937 romantic comedy film directed by Richard Boleslawski, starring Joan Crawford, Robert Montgomery, and William Powell. It was adapted from Frederick Lonsdale's play of the same name, which had previously been filmed in 1929 with Norma Shearer and Basil Rathbone as the leads.

Fay Cheyney (Crawford) is a rich widow. On a boat headed to England, she mistakenly enters the suite of Lord Kelton (Frank "Wizard of Oz" Morgan), an older English noble, who takes an immediate liking to the attractive young woman. Also on the boat is Lord Arthur Dilling (Montgomery), The Casanova, a young cad who starts aggressively pursuing lovely Fay.

What neither of them know is that Mrs. Cheyney is actually a con artist and thief. She and her "servants" are all actually members of a gang, led by her "butler", Charles (Powell). Their whole objective is for Fay to worm her way into this particular set of rich folks so she can steal a priceless pearl necklace from the home of Arthur's aunt, the Duchess of Ebley. This is complicated, however, when Fay starts to fall in love with Arthur.

The story would be filmed yet again in 1951, as The Law and the Lady starring Greer Garson.