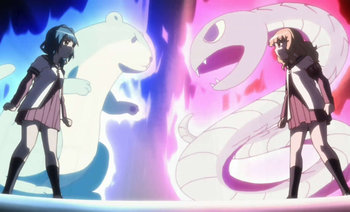 Who would win in a fight between a blue mongoose and a red snake?
"Ah, the Animal Kingdom offers many useful ideas!"
— Dr. Otto Octavius, The Spectacular Spider-Man, "The Invisible Hand"
Advertisement:

Humans have always been fascinated by animals. Love them or hate them, they usually provoke a strong reaction in people, from the Jerkass who turns to mush when confronted by a playful puppy to the tough guy who freaks out when he encounters something slithery. Most mythologies feature animals in starring roles; some belief systems feature animals as guides, oracles, or totems representing certain qualities or certain people. So of course animals are going to turn up as symbols in popular media.

This animal isn't around to be petted or kicked, or to assist in taking over the world... well, it might be, but only as a side job. The real purpose of these animals is that of most motifs: they're there to underline a theme, or make a statement about a certain character. They might not even be physically present at all. The "animal" might be the name of a football team, a charm on a bracelet, or an ornament on the mantelpiece.

Animals are used to depict characters more often than they describe themes. Even in the real world, describing a person by comparing them to an animal is a good way to convey your opinion of them: phrases such as "lion-hearted", "eagle-eyed", or "doity rat" are popular to the point of cliché. Therefore, many Animal Motifs are also Characterization Tropes. The wimp who spends his time watching the tigers at the zoo will most likely be stronger than you think. As for the girl doodling big black spiders with suspicious red hourglasses on their underbellies... think twice before accepting her invitation to "coffee".

Animals, like flowers, are a motif that tends to be gendered. Men are usually compared to animals that are clearly predatory: wolves, lions, and bears, for example. Women generally get the cute and fluffy animals as motifs, such as bunnies. However, women have historically had a strong association with the cat which, while cuddly and furry, is also a predator. Cats are therefore a common motif for female characters, but one aspect of the feline mystique will most likely be emphasized over the others — the woman will either be a predator, a seductress, or a sweet little kitten. (Lionesses are especially popular for Action Girls: they look very different from male lions, and most people know it's lionesses who do the hunting, so a lioness motif conveniently emphasizes both femininity and ferocity.) Women are also frequently associated with foxes, also a predatory animal, although it is the fox's attractive nature or reputation as a trickster that is being invoked.

Some animals can be used as a motif for either sex but the sex of that character can affect the image of the invoked animal: For example, horses are usually associated with women or little girls as a reflection of their innocent and supportive side. For men and the elderly, the horse is a symbol of their virility, work ethic, and determination. Bears are another example: If they are a man, then they either physically resemble a bear, or they are as strong and brutal as one. If the motif is given to a woman: then they are characterised as sweet and innocent until someone harms or upsets their children whereupon they will bring hell on Earth to protect them.

The important thing is that motif should correlate with the character and be displayed appropriately; for example, a shark motif would indicate the character is either; a villain, a greedy moneylender, or a combative, sociopathic antihero. Therefore, a shark motif wouldn't apply to an altruistic, cheerful paragon who favors clemency over brutality. note Since in reality, sharks killing humans are extremely rare, it is entirely possible to apply tropes like Not Evil, Just Misunderstood here, or Does Not Know His Own Strength since many attacks are merely "test bites" where the shark is not attempting to eat the target, only to figure out what it is, not having hands and all. Many sharks pose no risk at all to humans, including the largest sharks like the whale shark. However, given the commonness of Threatening Shark as a trope, this would be a subversion, like the opposite of Devious Dolphins. The motif must make sense to the character and allow the audience to understand the story you want to tell, if you use the wrong motif for the character then the audience won't know who to root for in the story.

In the world of fiction, someone who doesn't like animals at all is either a nasty piece of work or obsessively clean and germ-phobic. "Animal hater" is the word for them and so to dilute the "hard-heartedness" of this character, expect to see one particular animal that they just can't resist.note  For some reason, this animal has a tendency to be cats.