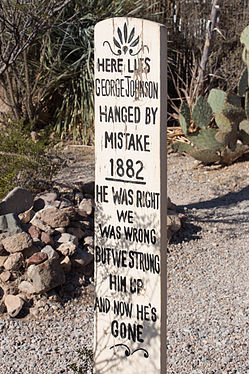 They said they was sorry
Frank Drebin: Hey! Look at that. The missing evidence in the Kelner case! My God. He was innocent!
Ed Hocken: He went to the chair two years ago, Frank.
Frank Drebin: Well…
[hastily puts the evidence back into the folder and into the filing cabinet]
Frank Drebin: What's the use!
— The Naked Gun: From the Files of Police Squad!
Advertisement:

A character has been wrongfully convicted of a capital crime, or their peers have been convinced of their guilt/wrongdoing. Their lawyer, girlfriend, parents, and children are all working to get him released from prison by way of a pardon, or perhaps a new trial. Time is running out, however, as the date of execution has been set.

The lawyer finally talks to judge and gets a stay, or the parents or girlfriend finally get in to talk to the governor and he issues a pardon. But by the time word gets to the warden of the prison, the execution has already happened. Or in a non-legal case, something that makes the discovery of this character's innocence moot has already occurred.

In some cases, it is long too late and those working to prove the characters' innocence know that they have since been executed and are merely working to posthumously Clear Their Name.

And Then There Were None is the Trope Namer.

The flipside of this is the Last-Minute Reprieve where an acquittal comes just in time. Related to Suspect Existence Failure, which is when a suspect's guilt is cleared because they've become the next victim. Usually the aftereffect of Vigilante Injustice.

While cleaning his desk after being fired for an embarrassing gaffe, Lt. Drebin recovers a key piece of evidence a little too late.

While cleaning his desk after being fired for an embarrassing gaffe, Lt. Drebin recovers a key piece of evidence a little too late.