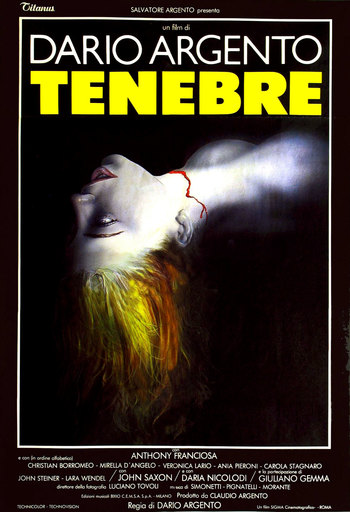 The film was released in Italy and through most of Europe without any reported censorship problems, but was classified and banned as a Video Nasty in the United Kingdom. Its theatrical distribution in the United States was delayed until 1984, when it was released in a heavily-censored version under the title Unsane.

Franciosa stars as Peter Neal, a American writer of violent mystery novels. In Italy to promote his latest work, he is accompanied by his literary agent Bullmer (Saxon) and his assistant Anne (Nicolodi). He is unaware that he is also being followed by his embittered ex-wife Jane (Lario).

Prior to Neal's arrival in Rome, a young woman is brutally slashed to death by an unseen killer. The murderer sends Neal a letter informing him that his books have inspired him to go on a killing spree. Neal is soon contacted by the police, who put Detective Giermani (Gemma) in charge of the investigation.

While the killings continue, Neal notices that TV interviewer Cristiano Berti (John Steiner) appears to have an unusually intense interest in the novelist's work.

Just when you think you know who the killer is, he is violently killed himself.