Film / The Sword and the Sorcerer 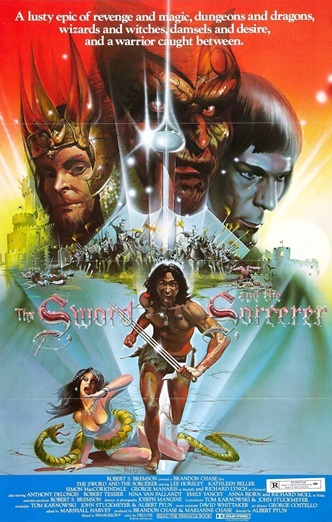 The Sword and the Sorcerer is a low-budget Heroic Fantasy movie from 1982 directed by Albert Pyun.

A generation ago, evil sorcerer Xusia aided an ambitious tyrant named Cromwell, allowing him to win a decisive battle against his enemies. But Cromwell betrayed the sorcerer, stabbing him in the back (literally). Xusia wasn't quite dead, but it took a decade for him to recover. In the process, Cromwell also slew his arch-rival Richard, but made the crucial mistakenote A flagrant and, ultimately, tragic violation of Rule 38 from the Evil Overlord List. of leaving Richard's young son Talon alive.

Cut to the present — a present that resembles a fantasy version of the Middle Ages — and Talon is now a grown mercenary. With the help of a sword with 3 blades (2 of which it can shoot like missiles), Talon rides into town, swings his sword, woos the princess, defeats the evil Cromwell, and finally slays the evil sorcerer for good.

At the end of the film's credits, we were given a tantalizing promise of the further adventures of Talon in later movies, none of which ever materialized. A Spiritual Successor, titled Tales of an Ancient Empire, was eventually released in 2010 — but with almost no relation to the original film.