Film / Tales of an Ancient Empire 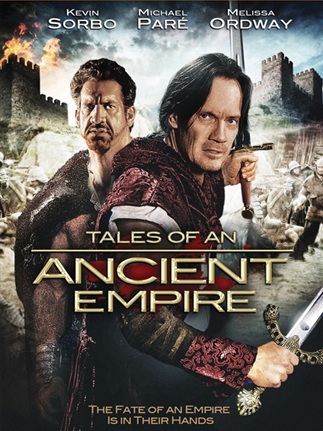 Tales of an Ancient Empire is a 2010 fantasy film directed by Albert Pyun, starring Kevin Sorbo, Michael Pare, and Melissa Ordway. It is the Spiritual Successor to Pyun's debut film, The Sword and the Sorcerer.

Queen Ma’at finds her kingdom of Abelar under attack when treasure seekers accidentally open the tomb of vampire queen Xia. The queen sends her half-sister, Princess Tanis, to the outlaw city of Douras to find her real father so he can save the kingdom. Meanwhile, servant girl Kara – who shares the same father as Tanis, but her mother is Xia – discovers her true nature as a vampire and begins hunting Tanis. Once in Douras, the princess finds her half-brother Aedan and convinces him to help her. Together they locate half-sister Malia, half-sister Rajan and her daughter Alana. With this small group they plan to stop the vampire queen Xia before it is too late.

Despite being almost universally panned by critics and fans alike, the film boldly promises yet another sequel to come.