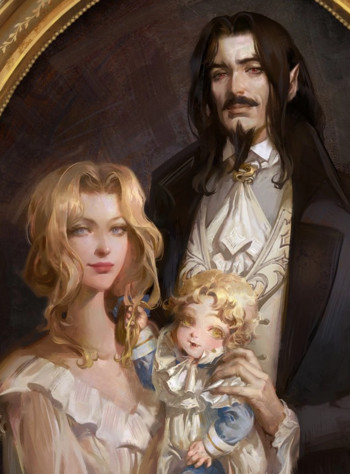 "My mother found it difficult to tell me that I wasn't like other children; I could never share a life with whole human beings. I slowly learned that the thing that raped my mother and fathered me was no living feeling man, but a malignant force of cancer that refused to be destroyed. It wasn't only her blood my mother gave to keep me alive, her youth and her own life was sucked up into the syringe that fed me."
— James Eastman, Grave of the Vampire
Advertisement:

A "dhampyr" is a child born of a vampire and a human. They are a prime example of Hybrid Power.

In vampire folklore, they were said to be normal humans, but would eventually become vampires after death, with the process repeating itself for generations. In modern fiction, they may have all of a vampire's powers and none of their weaknesses, or watered-down versions of both: half as strong but only uncomfortable in sunlight. A stake to the heart is still lethal though — although, wouldn't a stake to the heart kill you anyway? In some instances (video games especially), holy objects or magic will remain a problem for them even if they are good. Dhampyrs are often vampire hunters and hunters of their own kind, with their vampire parent often being at the top of the list. Just as some cultures once believed that murderers and suicides would rise as vampires, a child born approximately nine months after the death of the father might have been accused of this.

It is more common for the father to be the vampire in this mating since according to folklore, male vampires had far higher sex drives than their female counterparts and were often rapists who targeted human women because they were easy prey. In fiction writing, that is sometimes the case, and other times female vampires are infertile, depending on their degree of deadness. Sometimes a coupling is avoided altogether by just having a vampire (male or female) bite and turn a pregnant woman (see Blade).

Dhampyrs who receive all of a vampire's strengths and none of the weaknesses are usually tormented with an uneasy childhood when done right, either because Kids Are Cruel and they're hybrids surrounded by bigots, or because their vampire half is rightly feared by mortals. Of course, that's assuming their vampire parent is around.

The words "dhampyr" and "vampire" are closely related. When the Serbo-Croatian word vampir entered the German language, it became "vampire." It then entered English, nearly unchanged from its root. In Albanian, however, "vampir" underwent a larger change and became "dhampyr."