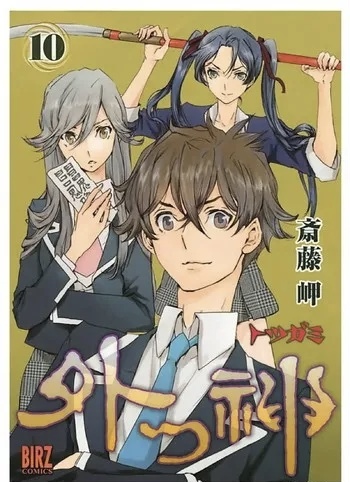 Long before her death, high schooler Tasaku Narukami's grandmother told him that he will protect the shrine he will inherit from her after she dies. After his grandmother passes on, Tasaku tries his best to uphold her wish by cleaning the shrine, even though he has no idea what his late grandmother meant when she told him to protect it.

While he sweeps up the shrine, an ominous wind moves by him, causing him to break his glasses. This is a huge annoyance for Tasaku, as he has a unique ability to see youkai and ghosts behind people and his glasses help him cope by blocking said ability.

One day, Tasaku spots the beautiful yet mysterious Chikage with his teacher Kozuka and notices that they are talking about him. Tasaku then follows them to his grandmother's shrine.The three of them realize that the barrier protecting the shrine has been torn and that a spirit called a totsugami is leaking out of it. Just as Kozuka prepares to handle the spirit with his own totsugami, Tasaku suddenly awakens his powers due to his fear and ends up subconsciously reciting a chant to seal the totsugami away.

After the incident is over, Chikage and Kozuka teach Tasaku about totsugami and the role of a totsugamimori, as well as the rips in the ground called mounds where totsugami emerge from. Armed with this information, Tasaku now has to learn how to navigate the world as a novice totsugamimori in order to fulfill his duty as the protector of his family shrine.

Totsugami (or Foreign Gods) is a fantasy seinen manga written by Misaki Saito. The manga is now complete at 10 volumes.

Tropes listed in Totsugami include: