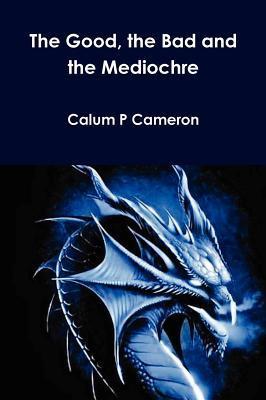 The Mediochre Q Seth series, otherwise "The Mediochreverse" or just "The Mediochre Series" — although that last sounds unfortunate — is an in-progress five-part Urban Fantasy series by Calum P Cameron. He started writing it while in high school, primarily out of boredom, but also out of a desire to see if he could write a story about a unique and powerful Doctor-like individual while having them remain realistically human and fallible.

Charlotte Johnson is an Ordinary High-School Student from the USA whose parents have forced her to move to Edinburgh, Scotland — with predictably resentful results on her part. So far, so normal. Then, one day, she is almost run over by a lorry.

The driver of this lorry is one Professor Doctor Laird Sir Mediochre Quirinius Seth, PhD MusD MSc CBE OBE MIMC VC-Bar — although he prefers just "Mediochre" or "Dr Seth" — an eccentric dracologist from the parallel society that has existed for generations hidden from Charlotte’s own world by a government-enforced Masquerade. A society very much like her own, but with a few important differences — most obviously: magic.

The world turns out to be a lot more dangerous and interesting than Charlotte had initially assumed, full of giant dragons, emotionless half-vampires, powerful magic-users (or "mancers", to use the correct term) and, of course, Mediochre himself, who's never been the same since an accident in his past left him immortal, trapped in a fifteen-year-old body and able to calculate probabilities exactly at the drop of a hat. And those are the people on her side. Or at least, she's pretty sure they are. It's hard to tell, sometimes...

When complete, the series will consist of:

In addition, it has become customary for the author to write a "Christmas Special" short story every December — seemingly working his way through the main party of characters and focusing one story on each. Thus far, these include:

To date, two non-Christmas short stories have also been released:

For those wondering, the name 'Mediochre' is an intentional pun on 'mediocre

' — although in-universe, Mediochre insists it’s a shade of red between pale ochre and dark ochre

The author is a troper, so expect a lot of tropes.

open/close all folders
Series as a Whole
The Good, the Bad and the Mediochre
Black, White and Shades of Mediochre
Caught Mediochre-Handed

The Christmas specials provide examples of:

Other stories provide examples of: