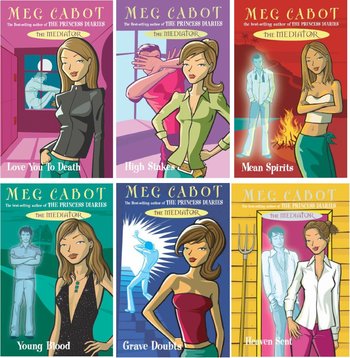 "I can see ghosts. I can talk to ghosts and, if necessary, I can kick some serious ghost butt."
Susannah 'Suze' Simon, Shadowland/Love You to Death
Advertisement:

A Young Adult series by Meg Cabot. Suzannah Simon has a problem: she's been able to see and speak to ghosts all her life, something that no one else she has ever encountered can do. This has led to more problems than she can count over the years trying to help out the lost spirits she encounters- including being arrested for breaking and entering, a weird dislike for old houses and just all-around general odd behaviour that no one else can fathom.

Things appear to be looking up somewhat when her mother remarries and they move out to Carmel, California to live with their newly extended family- Andy and his three sons, Suze's new stepbrothers... and a very sexy guy who happens to enjoy hanging out in her bedroom.

Too bad the guy's been dead for a hundred and fifty years.

The series follows Suze throughout her adjustment to her new stepfamily in California, her acquisition of friends and allies, her many conflicts (both with ghosts and the living) and the development of her relationship with Jesse de Silva, the ghost of a twenty-year old man haunting her bedroom- all wrapped up in the Deadpan Snarker attitude of the teenage protagonist.

A novella, The Proposal, and a seventh book, Remembrance were released in 2016 with a time-skip of nine or ten years.

Tropes in The Mediator include: