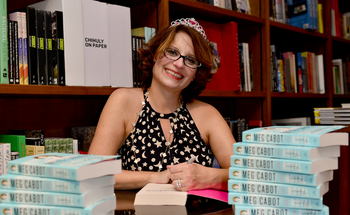 Meggin Patricia Cabot (born February 1, 1967) is a Chick Lit author extraordinaire. Probably most well known for her The Princess Diaries series, which was adapted for a Disney movie. Has written a number of series for teens and adults and also has a couple of series for children.

Works by Meg Cabot with their own trope pages include:

Cabot's other work provides examples of: