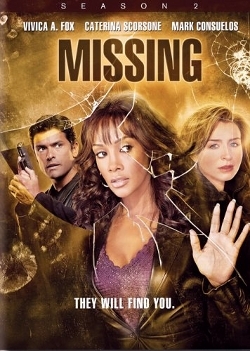 1 - 800 - Missing (2003-2006) is a crime drama centered on Jessica Mastriani (Caterina Scorsone), who acquires psychic abilities after being hit by lightning. She uses the clues from her psychic visions to help the FBI locate missing persons. At first, Jess is unable to control her psychic abilities, and the dreams she gets after seeing pictures of missing persons are full of symbolism and often difficult to interpret. She becomes better able to control and understand her visions as the series goes on.
Advertisement:

After the first season, the show was retooled, which included replacing the supporting characters, making the dynamic more ensemble-based, replacing the theme tune with something more upbeat, and changing the title to just Missing.note Not to be confused with the non-fiction series Missing, which profiles actual missing persons cases, or the 2009 BBC crime drama of the same name.

Altogether, the show lasted three seasons on Lifetime in the U.S. (airing on A and later WNetwork in Canada). So far, only the second season has been released on DVD.

1-800-Missing is based on the YA novel series 1-800-Where-R-U by Meg Cabot, but shares few similarities beyond the basic premise. This is lampshaded in the later books, where the TV show exists in-universe and many characters watch it, but talk about how it has no basis in Jess' real experiences.