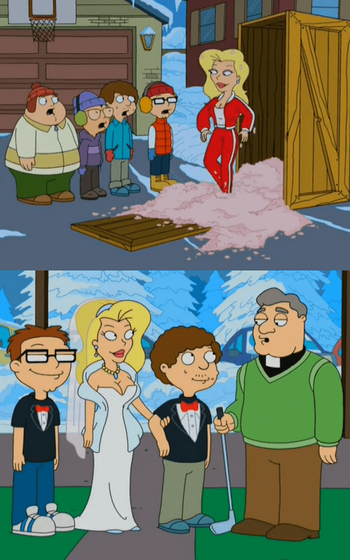 "I don't know what sort of wacky-ass mailing list I'm on. Did someone sign me up for this, or is the logic something like 'This guy has a Web page. Ergo, he has to import potential mates from former USSR nations.'"?
— The Book of Ratings

The Mail-Order Bride plot line is where a man marries a woman from a poor country sight unseen or seen once. Usually played for laughs or for very dark drama, but can also lead to Marriage Before Romance.

A common setting for this is in The Western, but can easily evolve in any situation where there is a surplus of men at one place and a surplus of poor women at another place. The World War II version of this trope would be the "Army War Brides" movie/movies. In that time period, many soldiers returned to their home country with a foreign bride.

If the trope is dealt with in a drama, it will be in a series like Law & Order. The mail-order bride plot causes a crime or scam that results in either an elaborate Gold Digger or Con Artist scheme if she's the perp (though usually a side of Sympathetic Criminal may be at play as she's escaping her home country's poverty). If he's the perp (or if it's SVU), it's a combo plate of forced prostitution, Domestic Abuse, Marital Rape License, forced labor, and/or murder. The man played as a loser, misogynist, and creep who resorted to exploiting the desperation of women in third-world poverty and treating her as a combination of domestic labor and Sex Slave. Add plot complications caused by the bride's uncertain legal status. note  Some Truth in Television, the case of Jack Reeves

, who murdered two mail-order brides, being a notorious one.

It's also the fodder for an entire genre of romance novels, in which a young woman from east of the Mississippi becomes a mail-order bride for a man who has gone out West to seek his fortune. Naturally given the genre, after the usual round of drama they genuinely fall in love.* This wasn't at all uncommon in the time period depicted, but needless to say, the usual genre conventions did not always apply in real life.