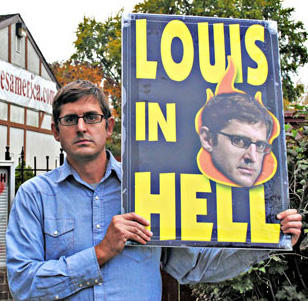 Sign courtesy of the Westboro Baptist Church.
"In the past, I've tried to show the human side of people involved in stigmatised or misunderstood lifestyles. I've tried to resist easy judgments and not pander to prejudices."
Advertisement:

Louis Theroux (born 1970) is a British-American documentary filmmaker, whose career has mostly been spent working for The BBC, first coming to attention with the series Louis Theroux's Weird Weekends, and continuing that with a series of one-off documentaries produced starting in the 2000s. Theroux's documentaries usually take place in America, and usually feature him getting up-close and personal with members of fringe communities, including prisoners, gamblers in Las Vegas, plastic surgery addicts, Neo-Nazis, and perhaps most famously, the Westboro Baptist Church. He very rarely makes actual judgements on those he is interviewing, but at the same time isn't afraid to ask probing questions.