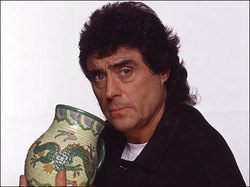 [aside to camera] If home is where the heart is, then this is home to me: an auction room, an auction day when the old ticker beats faster with the slender possibility that somewhere, just somewhere among the birdcages, silver spoons, commemorative medals, roll-top desks and castoffs from Granny's attic, somewhere amongst that lot, a genuine authentic antique will appear shining with all the love that made it.
—Lovejoy
Advertisement:

Lovejoy is a BBC TV comedy-drama series (1986, 1991-94) based on the books by Jonathan Gash, about an antiques dealer in East Anglia in the UK. The titular protagonist Lovejoy (played by Ian McShane) is what's known in his trade as a "divvie" — someone with almost a sixth sense which enables him to divine real antiques from fakes and accurately determine their worth. He's also simply very knowledgeable about antiques in the mundane sense, yet despite his obvious talent for the business he's quite routinely broke and generally found staying barely a step ahead of the law.

Lovejoy is assisted in his work and schemes by Tinker Dill, a gregarious drunkard whose knowledge of antiques rivals Lovejoy's; Eric Catchpole, a young man whose father pays Lovejoy to teach Eric the trade; and Lady Jane Felsham, a married aristocrat whose dabbling at interior design brings her into regular contact with Lovejoy. Charlie Gimbert, a much more successful but less popular antiques dealer in town, provides Lovejoy with a foil, though as the series goes on they find themselves cooperating against their will more often.

Hugely popular in its early-'90s heyday, attracting circa 15 million viewers on BBC 1, Lovejoy was helped by its scenic locations in the rural east of England, leisurely and immersive pacing (a runtime of 50 minutes per episode), footage shot fully on film (avoiding the 'cheapness' lent by a Video Inside, Film Outside look), and significantly the charismatic presence of McShane as the eponymous amiable rogue — who would not infrequently break the fourth wall to reveal his thoughts and motives in asides directly to camera. It was filmed for six seasons, all of which have been released on DVD, and remains a common sight on repeats channels on UK television into the 2020s.

No relation to Reverend Lovejoy, or the indie rock band Lovejoy.