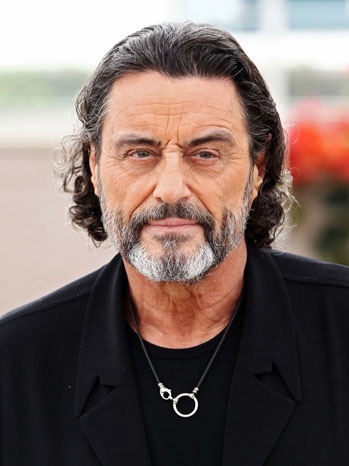 "Every actor has to love and loathe the character he plays."
Advertisement:

Ian David McShane (born 29 September 1942) is a versatile English actor with a distinctive, purring voice. He first solidified his reputation in the British series Lovejoy, but his career experienced in renaissance with his fierce performance as Al Swearengen in Deadwood, which led to a prolific later career in a wide range of high-profile film and television productions.

His many roles on screen have been predominantly villainous, including Judas Iscariot in Jesus of Nazareth, Blackbeard in Pirates of the Caribbean: On Stranger Tides, Tai Lung in Kung Fu Panda, and bisexual Gayngster Teddy Bass in Sexy Beast. However, he also plays good guys, such as Mr. Bobinsky in Coraline and King Brahmwell in Jack the Giant Slayer. Incidentally, he was at drama school with John Hurt and they shared an apartment, leading to a lifelong friendship.