Film / The Last of Sheila 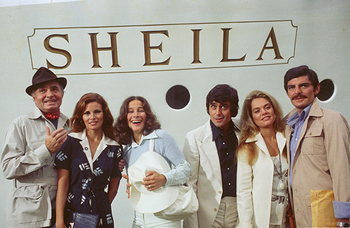 The Last of Sheila is a 1973 neo-noir mystery film directed by Herbert Ross and featuring an All-Star Cast.

Sheila Greene, Hollywood gossip columnist, angrily stalks out of her Malibu home during a cocktail party one evening, and is struck and killed in the street by a motorist.

Cut forward one year. Her husband, wealthy movie producer Clinton Greene (James Coburn) hosts some of his movie acquaintances on his yacht for a Mediterranean cruise. The guests are all people who were at the party the night of Sheila's death. They include:

Clinton offers up to all these movie hangers-on and rejects a part in his new film, The Last of Sheila, about his late wife. Because Clinton is an arrogant jerk, he doesn't just offer them jobs or anything. No, he arranges an elaborate scavenger hunt in which each of his guests are given cards with true-life secrets of a different guest. Whoever wins the game, by discovering the most embarrassing secrets about the other guests, will get to work in the movie.

However, a shocking, tragic event interrupts the second scavenger hunt. As the guests wonder what to do next, they show each other the "secret" cards and discover that one of the secrets is "You are a Hit-And-Run Killer." Tom figures out Clinton's true intention—the whole scavenger hunt routine is actually a clever ruse to expose the identity of the person who killed Clinton's wife.

The Last of Sheila was written by the oddball duo of Anthony Perkins, best known as playing Norman Bates in Psycho, and Stephen Sondheim, world-famous as the creator of Broadway musicals like Into the Woods. It is the only screenwriting credit either Perkins or Sondheim ever received.