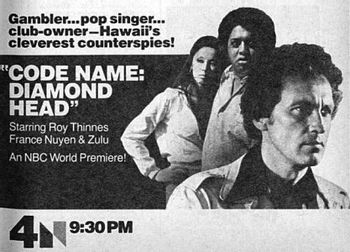 Code Name: Diamond Head is a 1977 Made-for-TV Movie from Quinn Martin's company. It was intended to be the pilot for a series, but the movie failed to convince the network executives it was worth a series.

The plot, such as it is, concerns Sean Donovan (Ian McShane), an evil traitor spy going by the codename "Tree," who plans to steal a biological nerve agent from the Navy and sell it for 100,000 dollars. It's up to Johnny Paul (Roy Thinnes), the eponymous agent Diamond Head (so named for the actual place in Hawaiʻi) to stop this evil spy. Rounding out the main cast are his partners in crime, Tso-Tsing (France Nuyen), a local club owner, and Zulu (played by himself), a pop singer. Tree proves more clever than they realize as he manages to kill and pose as a high-ranking Pentagon official in order to get the nerve gas. However, things quickly unravel as Tree recognizes Tso-Tsing from another operation and blows the cover of all three spies. When he makes off with the gas and Tso-Tsing, it's up to Paul to recover both and stop Tree in time.

For tropes and specifics relating to the Mystery Science Theater 3000 version, please check out the episode recap.