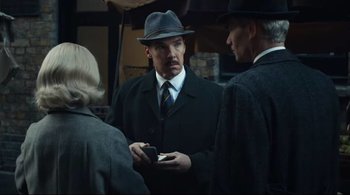 "If this mission was the least bit dangerous, you really are the last person we'd send."
Advertisement:

Set at the height of the Cold War, British businessman Greville Wynne (Cumberbatch) is recruited by MI-6 to make contact with a high-ranking Soviet mole. He agrees to what is laid out as a single, completely secure trip but is soon forced by circumstance and his own conscience to get more and more involved in a mission that holds the safety of the whole world at stake.

Not to be confused with The Courier (2019), a previously-released action thriller of the same name but otherwise unrelated.