For Halloween, I Am Going as Myself 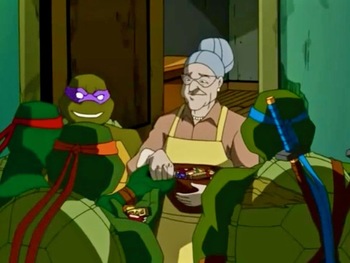 "Halloween in New York City. ... A day when you fit in with everyone else... when even a teenage mutant ninja turtle can walk around in the open."
"Oh my, that [costume] is wicked! Who made that mask for you? IT'S EXACTLY LIKE THE 'WANTED' POSTERS!"
— Masquerade Partygoer, Dishonored
Advertisement:

For the paranormal, their mere appearance in a blissfully unaware society can cause chaos and panic. Thus, they constantly have to hide their nature from those not in the know.

Except, that is, for one glorious day each year: Halloween. On this singular day, they can walk around openly and be among people who look like zombies, ghosts, goblins, sorcerers, and demons. And all that they'll receive are glowing compliments on the design and workmanship of their "costume" (well, usually, anyway) and possibly some candy. And they don't even have to spend any money on it.

This is the rare time when someone can be themselves among the populace and still do some good, or just have fun. They're also likely to enjoy a good Masquerade Ball.

While "Non-Humans and Halloween" is a popular use, the trope is really about how the circumstances of an event allow a normally secretive character to walk around in the open without destroying The Masquerade, thus it can also happen at carnivals and costume parties or by just claiming to be a weirdo who likes to dress up at random times. In effect, they are masquerading as themselves, and even outside of having fun there are advantages to being the unnoticeable Clark Kent instead of Superman. Similarly, this often results in the unusual sight of a superhero in their civilian identity but still wearing their actual costume.

A Sub-Trope of Genuine Imposter. Compare All Part of the Show, Your Costume Needs Work, Bruce Wayne Held Hostage, Mistaken for an Imposter, Hidden in Plain Sight, I Am Spartacus, and Quirky Town.

Venom, The Life of the Party!

Venom enjoys his newfound freedom from Eddie by taking time to be himself at a rave party.

Alternative Title(s): This Is My Costume, For Halloween Im Going As Myself

Venom, The Life of the Party!

Venom enjoys his newfound freedom from Eddie by taking time to be himself at a rave party.