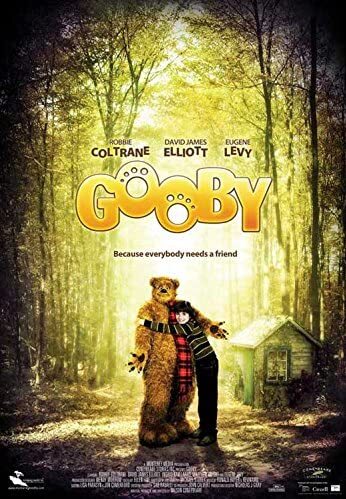 Because everybody needs a friend.
"Every studio needs a failure. And that failure is Gooby."
— Danny Gonzalez, Drew Gooden and Kurtis Conner
Advertisement:

Gooby is a live-action film released on April 17, 2009 directed by Wilson Coneybeare.

Willy is a kid who is neglected by his business parents, and fears a fictional species called Hoonies. Luckily, he finds comfort in his home, a place where he is safe from the Hoonies... until he has to move.

After moving, Willy is no longer safe from the Hoonies, and they start to invade his surrounding area, leaving him paranoid and scared of his new house, and school isn't much better with a mean bully and a weird teacher that's desperate for fame. Willy can't find comfort anywhere. Until he encounters a familiar friend. Gooby! His old teddy bear from long ago has somehow come to life, and is as tall as the average adult, but that doesn't mean he's any less charming.. well, actually, it does. Gooby proves to be a bit of a problem, as he's not trying to be secretive and is going out in public uninvited. He still proves to be just the comfort he used to be at times, but Willy must deal with his shenanigans. As Willy and Gooby live together, they get themselves into adventures and hijinks, and precious memories.

Gooby did not do well with critics or in the box office, as it was a massive flop, and the film itself is said to be suitable only for kids and is Accidental Nightmare Fuel.

Gooby provides the following examples of:

Advertisement:
Willy: Gooby, you're supposed to wait until I come out to the backyard!
Gooby: Well you don't come back to the backyard anymore! Always playing soccer and hanging out with your new friends.
Willy: That's not true.
Gooby: Don't worry about Gooby! Just leave him in the shed day and night, with his moldy old comics and his ratty old sleeping bag!
Willy: You're a liar.
Gooby: And we don't even draw Hoonies anymore!
Willy: Hoonies?! There's no such thing as Hoonies! They're for little kids!
Gooby: Well if there's no such thing as Hoonies, then maybe I should go!
Willy: Well then maybe you should! Especially if all you're gonna do is cause trouble.
Gooby: Yeah? Then maybe I will!