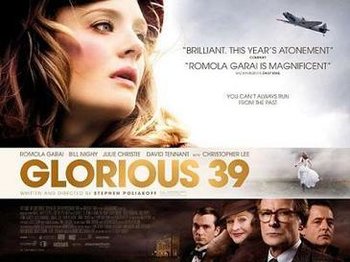 Glorious 39 is a 2009 Stephen Poliakoff film, starring a ridiculous number of high-profile actors, such as Romola Garai, Bill Nighy and David Tennant. It tells the story of an upper-class family in the months leading up to the Second World War - sort of like Brideshead Revisited, but with more politics.
Advertisement:

The film begins with a young schoolboy, Michael Walton (Toby Regbo) asking about his great-aunt Anne Keys. Anne grew up the adoptive daughter of Sir Alexander Keyes, a notable politician in favour of appeasing Nazi Germany. Anne lives a charmed life, spending most of her days running round the family ruins in Gorgeous Period Dress and flirting with her boyfriend, Lawrence. Until one day, she organises a birthday party for her father... and the mysterious Mr Balcombe shows up.

At the party, family friend Hector Haldane delivers a passionate speech about the need to stop Nazi tyranny — and two weeks later apparently kills himself. Tragic — but hidden in the family archives Anne finds a recording of Hector, which makes it clear that someone was blackmailing him.

Meanwhile, at a family picnic the baby Anne was supposed to be looking after goes missing, and only after Anne has roused the entire family to search the woods is he found — safe and sound, in a place she'd already looked. Anne knows Balcombe has something to do with all of this, but now everyone else thinks she's hysterical.

Or they appear to, anyway. Most of the recordings in the archives have been taken away by Balcombe, but Anne has kept a few hidden. Desperate to find some proof of a conspiracy, she listens to them all and hears her brother's voice come through loud and clear. Politicians at the highest level of government have been involved in a plan to avoid war at all costs — and now want peace at any cost — and Anne's family are at the heart of it.