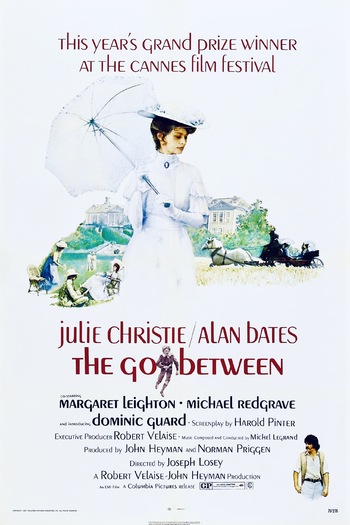 "The past is a foreign country; they do things differently there."
Advertisement:

Leo Colston, an elderly man who has never married, discovers a diary he kept as a schoolboy which recalls a long-ago summer that he has subconsciously blocked from his memory.

In 1900, Leo is invited to spend the summer with his school friend Marcus Maudsley and his family at Brandham Hall, the grand Norfolk house they lease from Hugh, Viscount Trimingham, a genial aristocratic war hero with a disfigured face. The socially-ambitious Mrs Maudsley has arranged a marriage between Trimingham and her daughter Marian.

Left to his own devices for an afternoon, Leo wanders into the yard of Ted Burgess, a tenant farmer, who befriends Leo and persuades him to take a message to Marian. Marian sends him back with a reply, and thus the naive Leo is unwittingly entangled into a role as intermediary in the developing romance between Marian and Ted.

A faithful film adaptation was released in 1971, directed by Joseph Losey, written by Harold Pinter, and starring Julie Christie as Marian, Alan Bates as Ted, Edward Fox as Trimingham, Margaret Leighton as Mrs Maudsley, Michael Redgrave as Leo, and a whole battery of British character actors.