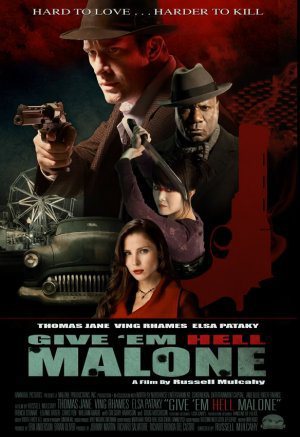 Give 'Em Hell, Malone is a 2009 Neo-Noir film produced by Russell Mulcahy, who also brought us Razorback and Highlander. It stars Thomas Jane, Ving Rhames and Elsa Pataky.
Advertisement:

Malone (Jane) is a former private eye, who has turned gun for hire. One day, he receives a job to retrieve a briefcase from a hotel but he the finds the building is filled with armed gangsters. After a violent shootout with the mobsters, of which Malone is the lone survivor, he manages to get the case. Suspecting that the job was a set up, he returns to his handler, Murphy, to find out who hired him. It turns out it was the beautiful Evelyn (Pataky) who hired Malone to steal the case from a gang controlled by the local crime lord, Whitmore, as she needs it to trade for her brother whom Whitmore is holding hostage.

Meanwhile Whitmore learns that the case has been taken and is furious. He puts a five million bounty on Malone and brings in the local Psychos For Hire to retrieve the case.

But things are not as clear cut as they seem...

A sequel was greenlighted for production in 2021.