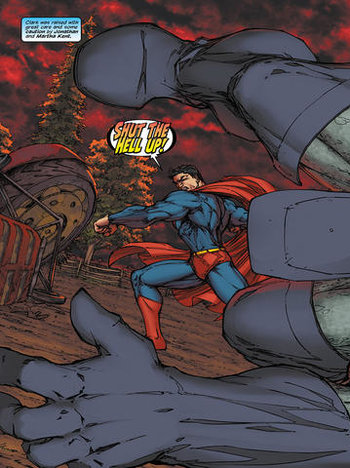 Language, Superman! What would Martha say?
"Under certain circumstances, profanity provides a relief denied even to prayer."
— Mark Twain
Advertisement:

A Precision F-Strike is when a character suddenly swears in an uncharacteristically strong manner, or when a swear is unexpectedly used in a work with mild language. It's usually intended to show that shit just got real serious.

Another variant is when a movie limits its swearing-in order to keep from getting an R rating, and so is forced to place it very strategically. If a movie uses the F word more than two or three times or in a sexual or aggressive way, it can easily get an R rating. If it's used up to two or three times, each in a non-sexual context, it usually stays PG-13 so long as it lacks any other content that would warrant an R rating. (Similarly, on television, a single F word guarantees at least a TV-14 L rating, and multiple uses are very likely to bump the rating up to TV-MA L.) As such, the writers will only have the characters curse when it actually means something.

Also, when Unusual Euphemism is normally in play in a work, having "real" oaths appear can have the same effect.

Due to the nature of language, this trope is prone to Values Dissonance about what words are appropriate. "Bloody", "cunt", "ass" and "twat", just to name a few words, have very different connotations on the two sides of the Atlantic — and that's just the differences within a single language. Although like many other English words, the word "fucking" exists with only a minor variation in German ("ficken"), it's only used as a verb and almost never as a curse word. The word "Scheiße" ("shit") and its variations are almost always used in exactly the same way as the word "fuck" in English. In many European countries, swearing is rarely considered an issue when it comes to film ratings — for example, Silver Linings Playbook, which has about seven dozen F words, was rated "tous publics" (equivalent to the MPAA's "G") in France, and children as young as six could watch it in the Netherlands.
The same can't be said about video games, however. In Europe, a single F-word can easily result in a PEGI 16 rating. In fact, the only words allowed in the PEGI 12 and lower categories are just mild swears like "hell" and "damn" (sometimes, however, the word "shit" can appear in 12-rated games). Similarly, in the United States, the F word is only known to have appeared in games with an M rating.

In some languages, however, expletives do not actually exist or are so uncommonly used and/or offensive that they are not allowed in the media. Seemingly equivalent words may be used similarly, but without the impact of an actual expletive (for example, although the Japanese word kuso is translated as "shit", its profanity level is more along the lines of "crud" and is often used in children's shows by child characters without raising alarm). These languages may have levels of politeness which serve the same purpose (again, Japanese), and translations often take advantage of the dub/sub language's expletives to give the same feeling. For subtitles, this crosses over into Spice Up the Subtitles, unless the expletive used by the translator actually is said in the original dialogue, as is known to happen.

Note that when using this trope in the context of the quote, DON'T attach it to every single time said quote contains "fuck", "shit", etc. This trope IS applicable if it's for a case of unusually strong swearing or of the party that uttered the quote isn't exactly known to be dirty-mouthed.

This trope is an intersection of Sophisticated as Hell and Conservation of Ninjutsu; related to OOC Is Serious Business. May overlap with Atomic F-Bomb for extra emphasis. Compare Minor Insult Meltdown, Quote Swear Unquote, This Is for Emphasis, Bitch!.

Contrast with the Cluster F-Bomb and Gosh Dang It to Heck!, although it can overlap with the latter if the work in question usually doesn't even contain mild profanity.

Due to the nature of the trope, the following examples will contain swearing. Please don't be a fucking bowdlerizer.

Discussed. We get this exchange from the pig cop:

Discussed. We get this exchange from the pig cop: