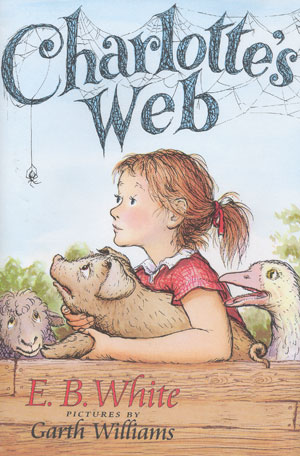 Charlotte's Web is a classic children's novel written by E. B. White (known for such other children's works as Stuart Little and The Trumpet of the Swan, as well as his adult writings in The New Yorker) and illustrated by Garth Williams.

The work is focused on a young pig named Wilbur, who, being the runt of the litter, is about to be slaughtered by John Arable. His owner's daughter, Fern, manages to save him and she raises him to be a strong, healthy pig. However, this means that he is sent down to a different farm, where he is being grown to be slaughtered for food. Determined to help, his spider friend Charlotte launches a campaign to save him. Reading the words brought to her on scraps from the rat Templeton, she begins weaving a series of words and phrases into her web, including "Radiant," "Terrific" and "Some Pig." Word spreads of these miraculous messages, but will it be enough to save Wilbur?

The novel, first published in 1952, has gained widespread acclaim and fame. It earned a Newbery Honor award, the Laura Ingalls Wilder Medal (in conjunction with Stuart Little) and has sold more than 45 million copies.

There was a stage adaptation (personally approved by E. B. White) written in 1983, which was later rewritten into a musical in 1989.

for HBO Max and Cartoon Network by Sesame Workshop.

A follow-up to the cartoon, Charlottes Web 2 Wilburs Great Adventure, was released in 2003, Direct to Video, to celebrate the 30th anniversary. Nobody involved in the original film worked on it.

Not to be confused with Babe, which also features a pig in a prominent role and many of the same themes, but has no spider character.

Some tropes seen in the book: