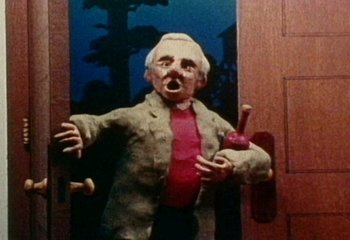 Closed Mondays is an Academy Award winning 1974 animated short film (7 minutes long) created by Bob Gardiner and Will Vinton (the latter would earned three more nominations for 1978's Rip Van Winkle, 1981's The Creation and 1982's The Great Cognito). It is a "claymation" short and is considered one of the pioneering works of the Stop Motion subgenre.
Advertisement:

A drunken man passes an art gallery that is, you guessed it, closed on Mondays, but gives in to curiosity when he discovers the front door has been left open. As the drunk stumbles around the exhibition room, squinting at the various paintings and sculptures, they come to life in odd and disturbing ways.