Literature / I Did NOT Give That Spider Superhuman Intelligence! 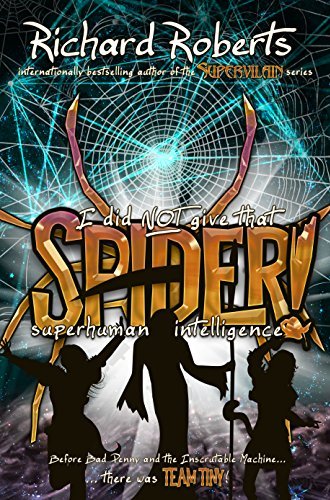 And now for something completely different
The prequel to the best-seller Please Don't Tell My Parents I'm a Supervillain.

Irene is an immortal jungle goddess trapped in a world of short-lived giants called humans. While she is recently retired, for a time she was acting as a superhero, using her family knicknacks to fight crime and have fun.

But not everyone in Los Angeles wants to have fun. Irene—or more appropriately, the hero Goodnight—discovers a cyborg zombie being accosted by hired thugs, and learns that the tortured girl is far from the first of her kind. A supposedly fair-play hero brutally murders the sidekick of a harmless villain, and more and more people are disappearing off the streets. Goodnight, together with the oldest superhuman on Earth (who also happens to be the youngest) and her new cyborg friend, sets out to make the city safer.

Along the way, she discovers a spider. A very intelligent spider, with some clever ideas on how to help...