Literature / Please Don't Tell My Parents I Work for a Supervillain 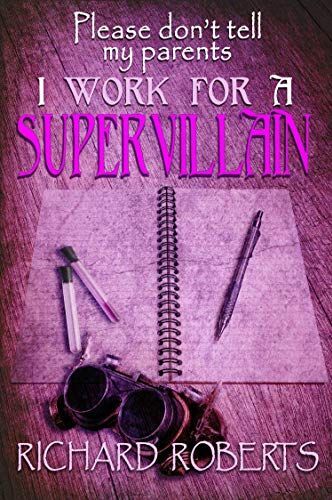 Please Don't Tell My Parents I Work for a Supervillain is another entry into the Please Dont Tell My Parents Young Adult Literature Capepunk series by Richard Roberts. It stars a new protagonist and several minor characters from the original series.

What do you do when you have the wrong super powers? Magenta's older brother is a superhero. She's starting high school at the school where kids with powers go, including the famous Inscrutable Machine. Except, Magenta's powers are no good for fighting. Her potions are useful, not dangerous. Her other power is just humiliating. What Magenta has plenty of is determination, and she tries fighting a supervillain anyway. She fails.

But for Magenta, failure is the beginning, not the ending. Suddenly she has a part-time job working for that same supervillain, who doesn't seem very villainous. She spends her afternoons buying mad science from smugglers, copying memories into a magic book, delivering messages to evil lawyers, and always, always, putting on a show. Soon, she's ducking heroes who want to save her from herself, and her best friends, who don't know the sidekick they're chasing is Magenta. Making sure her parents don't find out is the easy part.