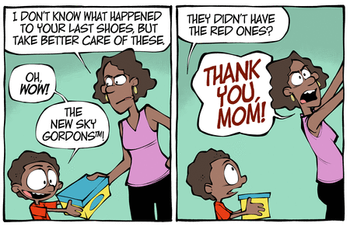 "Jesus [cured me of leprosy], sir. I was hopping along, minding my own business. All of a sudden, up he comes. Cures me. One minute I'm a leper with a trade, next minute my livelihood's gone. Not so much as a by your leave. 'You're cured mate.' Bloody do-gooder."
— The ex-leper, Monty Python's Life of Brian
Advertisement:

A character in a Too Desperate to Be Picky situation is actually quite picky about it. Unlike Even Beggars Won't Choose It where the unwanted object's quality is clearly bad, here the picky character is shown to be in no position to make such demands, yet does so anyway.

Does not need to be an actual beggar, merely someone who subverts the aphorism "Beggars can't be choosers".