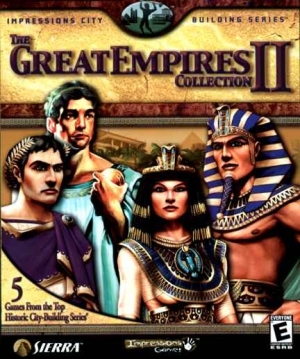 This page is about the City Building Video Game series. If you are looking for the city-building genre, see Simulation Game.
Advertisement:

A series of Simulation Space Management Games in which your primary task is to build a city. First developed by Impressions Games, then Breakaway Games and finally Tilted Mill Entertainment, most of the titles were published by Sierra and are among its few games where not everything is trying to kill you - only your neighbors, their gods, your gods, wild animals...

The settings for the games are all famous ancient cultures, but the devs at least tried not to fall wholly into Hollywood History:

, Medieval Mayor, was announced as being under development by Tilted Mill and originally scheduled for a 2013 release. Set in medieval Europe, it would have returned to a 2D representation and a walker system. Unfortunately, the game fell into development hell due to funding issues.